Grandma Mary (or Gigi as her great grandchildren called her) was a second mother to me. Growing up she lived right around the corner from me, and if I wasn’t at home I was at Grandma’s. I was always walking around the corner to her house to get some good food and spoiling like only a Grandma can give.

When I think of Grandma Mary, I think about selfless love. She loved EVERYONE and was always happy to help anyone out. She didn’t have a mean bone in her entire 4 foot 8 inch body. I can honestly say that I do not have one memory of my grandmother raising her voice…ever! Even when all seven of us grandchildren had to have been driving her crazy!

She was always happy to serve others, especially her family, in a selfless act of love. It made her genuinely happy to cook and bake for others, and that was her true gift. She was always up late at night, waiting for her pie to cook, or her bread to finish baking, sitting in her favorite rocking recliner, saying her rosary, which she faithfully said three times per day. She was never one to go to sleep early as there was always something for her to do! She was a self-professed night owl, and the grandkids loved that about Grandma. We never had to go to bed early when we slept at grandma’s house, and we always knew Grandma would order us pizza and let us eat candy into the night. 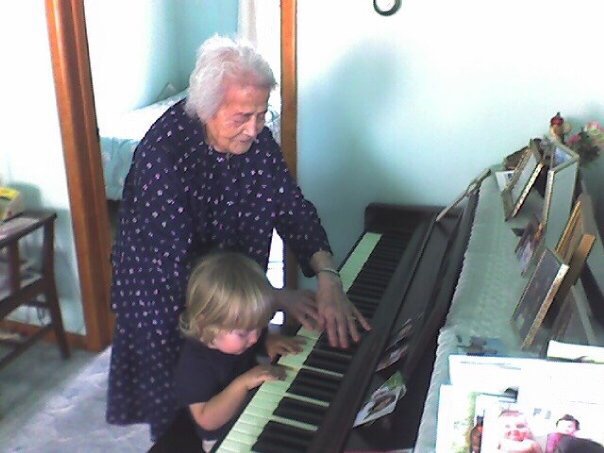 Sundays were the most special day for Grandma, as she carried on her Italian mother’s tradition of Sunday spaghetti dinner. I remember these family gathering times vividly as a child, as they are some of the fondest memories of Grandma’s. Walking into her house to find my cousins, the smell of spaghetti sauce and fresh baked apple pie, wondering who was already at the house and who was yet to come, the sounds of kids playing, adults laughing and talking, and inevitably the piano being played. Kool-aid and lemonade were the drinks of choice and dinner was spaghetti, meatballs, pork and salad. Sometimes, when we were really lucky, homemade raviolis or gnocchi (gnoches as Grandma called them) took the place of the spaghetti. We would hardly finish our dinner when Grandma would be telling us to eat more, or trying to get us to eat multiple desserts. Everyone was always too skinny for Grandma and no one ever ate enough to satisfy her. 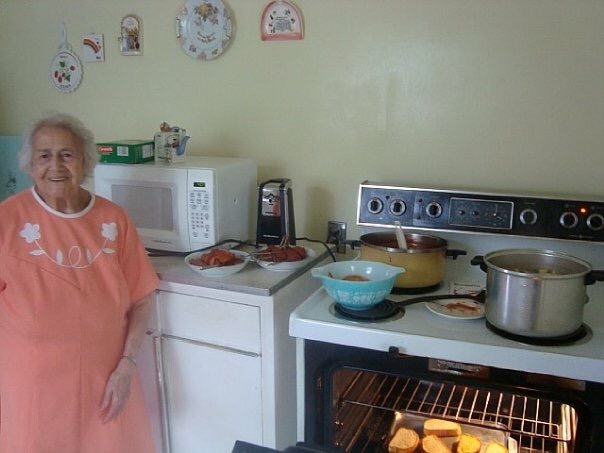 Grandma liked traditions and she carried on other traditions from her mother as well. Who could forget the Easter dolls? Even the older grandchildren would beg for them, and then as adults we would gobble up the ones Gram would give to our own kids that were too young to enjoy them. Or how about her famous crustells, or “crystals” as the grandkids called them, an Italian potato dumpling fried and rolled in sugar. I remember her making those many late nights, on a random request, for anyone. Or pizzelles, an Italian waffle cookie that Grandma called “chumbells”. She would make those chumbells on an old cast iron set that was her mothers.  She could barely lift it to turn it over on the stove! And of course, the other request from her grandchildren – homemade french fries. I blame Grandma for my deep affinity for homemade french fries! Again, it didn’t matter what time it was, midnight or later, all you had to do was ask.

That was pretty much true for anything with Grandma…all you had to do was ask and she would always give whatever she had to anyone. She may have been short in stature, but she towered over with Love. Her example of unconditional love is one we can all follow.

I believe that anyone who knew Grandma Mary would only have lovely things to say about her. She was truly an amazing woman. She always wore a dress, she never drank, never smoked, never swore, she never even raised her voice. She was a peacemaker. She had one photo of herself in her gym shorts and said that was on a dare from her younger sister, and this was probably the most racy thing from her past.  She was the sweetest, kindest person, who was loving towards everyone! She served others selflessly. She loved with action!

I can think of so many ways that she touched the hearts of those around her, and I cherish these memories. She will always remain close in my heart. Forever. I always think of Grandma’s Love when I read 1 Corinthians 13, because this is the type of love that she exemplified…

4 Love is patient, love is kind. It does not envy, it does not boast, it is not proud. 5 It does not dishonor others, it is not self-seeking, it is not easily angered, it keeps no record of wrongs. 6 Love does not delight in evil but rejoices with the truth. 7 It always protects, always trusts, always hopes, always perseveres.
13 And now these three remain: faith, hope and love. But the greatest of these is love.

Grandma Mary didn’t have much money, she never worked outside her home, she never even left the Upper Peninsula of Michigan, but what she DID have was faith, hope, and an overabundance of Love that she gave freely to anyone and everyone.

We can all learn a little from Grandma on how to love the way God asks us to. This was Grandma’s greatest gift of all, one that keeps on giving, LOVE…