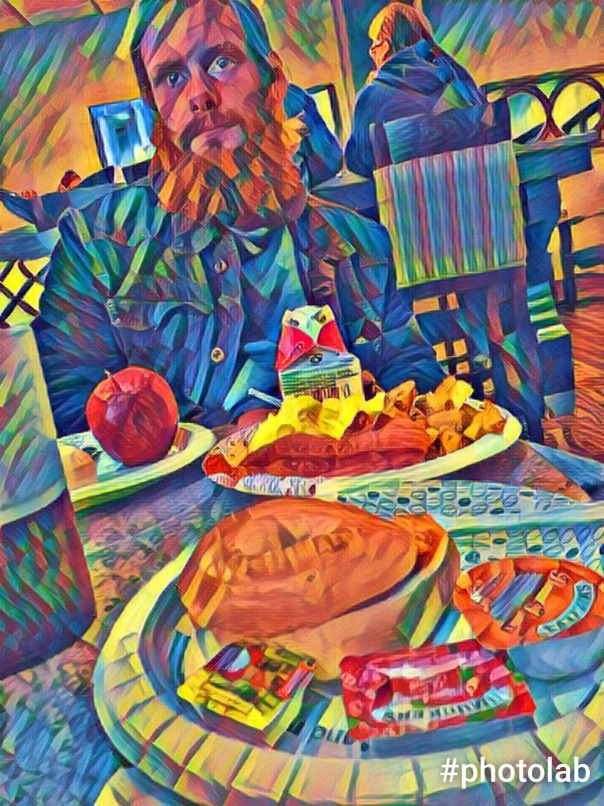 This is Dan. I had the pleasure of meeting him at my hotel this morning during breakfast. I was sitting alone, messing around on my phone, when Dan came up to me and offered me $1 to use my phone to call his mom. He said he was cold and hungry.  As I was trying to understand the situation, the hotel staff quickly came up and tried to shoo Dan away. Once I realized what was going on, I told the hotel staff that Dan was with me and all was fine. I invited him to sit down at my table and have some breakfast with me and tried to ignore the disapproving glances of the other guests all around me. I handed him my phone to call his mom and set about fixing him a few plates of food.

Then I tried to share some unconditional love with Dan. I tried to talk with him as I would talk with any friend. I listened to his stories. Dan shared with me that he was an adoptee (before I even told him my own adoption story, how cool is that?) and that he was placed with his adopted family when he was 3 days old. He said he figured his mom was “a hot mom” and that is why she gave him up. He said his adopted family does not like him and that he can’t live with them. He also told me he had just come from Florida to Green Bay two days ago because he thought he could live in his family’s garage here (I’m in Green Bay for my uncle’s funeral). Unfortunately, he was kicked out of there as well and now said he had nowhere to go. When I asked him where he had been previous to Florida, he said he couldn’t remember. It was clear to me after speaking with Dan for awhile, that he probably had some psychological problems. He seemed to have some irrational fears that people in fast food places where trying to poison other people, and things of this nature.

The Bible tells a parable of the Good Samaritan, a story we should all take to heart.

The Parable of the Good Samaritan
25 On one occasion an expert in the law stood up to test Jesus. “Teacher,” he asked, “what must I do to inherit eternal life?”

28 “You have answered correctly,” Jesus replied. “Do this and you will live.”

29 But he wanted to justify himself, so he asked Jesus, “And who is my neighbor?”

30 In reply Jesus said: “A man was going down from Jerusalem to Jericho, when he was attacked by robbers. They stripped him of his clothes, beat him and went away, leaving him half dead. 31 A priest happened to be going down the same road, and when he saw the man, he passed by on the other side. 32 So too, a Levite, when he came to the place and saw him, passed by on the other side. 33 But a Samaritan, as he traveled, came where the man was; and when he saw him, he took pity on him. 34 He went to him and bandaged his wounds, pouring on oil and wine. Then he put the man on his own donkey, brought him to an inn and took care of him. 35 The next day he took out two denarii and gave them to the innkeeper. ‘Look after him,’ he said, ‘and when I return, I will reimburse you for any extra expense you may have.’

36 “Which of these three do you think was a neighbor to the man who fell into the hands of robbers?”

37 The expert in the law replied, “The one who had mercy on him.”

Jesus told him, “Go and do likewise.”

There are many references to being a good neighbor in the Bible. Jesus tells us that we should treat ALL people with respect.

40 “The King will reply, ‘Truly I tell you, whatever you did for one of the least of these brothers and sisters of mine, you did for me.’

For we never know who we are truly entertaining…

Concluding Exhortations
13 Keep on loving one another as brothers and sisters. 2 Do not forget to show hospitality to strangers, for by so doing some people have shown hospitality to angels without knowing it. 3 Continue to remember those in prison as if you were together with them in prison, and those who are mistreated as if you yourselves were suffering.

As Dan and I were talking, he said to me that he didn’t think he would ever be in love. This was my entry point to trying to share a bit of the gospel with him. I shared with him my view that people in our society get the definition of love wrong. They think that love is that gooey feeling you get for someone, instead of an action that we do. I shared with him that Jesus is the model of true love, unconditional love, that He laid down his life for us because THAT is what true love looks like. It is not a feeling, but an action (in my humble opinion). I tried to share that unconditional love with Dan this morning. And I told him that it was not me, but an extension of God’s love pouring out of me.

Then just as fast as Dan came to my table, he said he was getting his things and disappeared…I can’t get him out of my mind. I thought he was getting his things and coming back to my table, but he was gone. I wanted to get him a new pair of gloves, but I couldn’t find him. So now I pray for Dan, and all those like Dan in the world. The people that are seen as the “throw-away” people of our society.

It’s interesting because just yesterday a fellow blogger (also a Dan!) told his story of coming upon someone like the Dan I met today in his own life. You can view his story here: and subscribe to his awesome youtube channel to get more encouraging videos like this one below!

So as fellow blogger Dan also said in his video, I say here——-I tell this story NOT to pat myself on the back— ALL THE GLORY TO GOD— but to encourage others to be the Good Samaritan to the broken, the poor, the “throw-away” people of this world.

Do unto others as you would have them do for you.

17 thoughts on “Be a Good Samaritan”